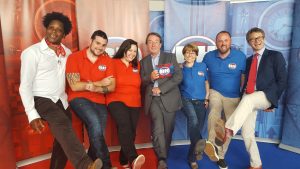 Easy I thought, five minutes of typing and a quick press of send and job done, I’d applied for Bargain Hunt, a show that Jane (my partner) had always wanted to take part in. An hour and half later I was still sat there!  I was desperately trying to recall (from the dark recesses of my mind), both of our funniest and most embarrassing moments of our life, as well as three things that folk might not know about us, what we did for a living (canal boat builders), our ambitions for the future, our hobbies, our interest in antiques and our tactics for the day (if we got through) and so on. I finally clicked the send button after over two hours of typing… well I had to delete and retype certain sections after realising some stories are best not mentioning to a television audience of 1.5 million people!

I soon forgot about the application as they receive about a hundred applications a day. But a couple of months later I got a call from ‘Tom’ a researcher for the show wanting to know a little bit more about us, we spent about half an hour chatting – this is part of the audition process apparently, they want to listen to how you come across and if you’re chatty enough for them, after 30 minutes I think he realised I was indeed quite chatty! He did the same with Jane and after her chat he informed us that we would be invited to an audition in Grantham, although this still didn’t mean we’d be on the show.

A few weeks later we were in a hotel in Grantham for an afternoon of antique games and mock up ‘Bargain Hunt’ type interviews, all of which was being filmed – slightly daunting in front of another 16 couples! Over the course of the weekend they were seeing over a 100 couples but only needed 26 for the next season of filming.

After the audition I was certain we wouldn’t get through, the room was full of gregarious couples with loud voices and a list of hobbies as long as your arm. One chap explained how he loved to do archery whilst riding a horse….I kid you not! Another woman had just swam across a sea channel somewhere and was displaying her medal to prove it!  Our hobby of waterfall walks seemed a little lacklustre… however Jane seemed a lot more positive than me as the crew were really interested in our canal boat building business. During the process we’d been chatting with one of the Directors and he’d explained ‘it’s actually about how you come across on film and whether the audience can connect with you’. I still had doubts, but they promised to let us know in the next few days. 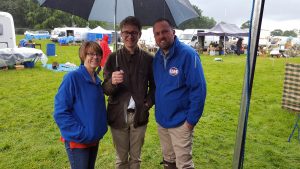 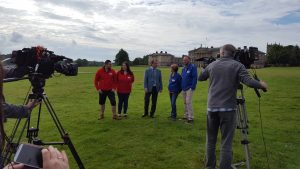 Well they did call and I was astounded that we actually got through. We would be filming for two days, one day buying our three items at an Antiques Fair at Kedleston Hall, and another day about a month later at the auction in Etwall!

We arrived at Kedleston and were shown to the ‘Green Room’, basically a marque in a field next to the fair! We were warmly greeted by the Director and introduced to the fellow contestants and the experts, Danny Sebastian and Jonathan Pratt (our allocated expert) as well as the Presenter Eric Knowles. Our blue fleeces were handed to us – apparently the BBC can’t stretch to both Fleeces and Polo shirts for each contestant to keep, so a decision was made that Fleeces were the order of the day, due to the cool breeze blowing across the fair ground.

Soon after a researcher gathered everyone around whilst the Director explained what would be happening during the day – they were filming two programmes so there were four couples including us, two sets of blues and two sets of red teams.

We all got on really well, there were lots of laughs and jokes, although a sudden air of nervousness was felt by all when the crew informed us that the first job of the day was to film the opening interviews for both shows – the bit where they say ‘Hello Contestants’ and we repeat a loud ‘Hello’ back.

We all walked up to a picturesque spot outside the Hall and stumbled through the interviews, this was probably the most daunting bit of filming mainly as there were three camera crews, three sound engineers, one director, two assistant directors, a producer and about five researchers, as well as the other contestants! Thank goodness they edited a lot of it out and didn’t make us look too bad!

As soon as both interviews were ‘in the can’ we were taken back to the ‘Green Room’ for a coffee and snack (the BBC can run to catering thank goodness). After another group chat with the Director it was decided that Jane and I with our rival Red Team, Emma and Adam, would be out filming our buys first. Each team were allocated a Camera Operator, a Sound Engineer, an Assistant Director and a Researcher. The Researcher kept hold of the money and would sort out getting the item back to the Green Room when purchased; they were also the time keeper. The crew are very strict about staying within the hour time limit,  they only stop the clock to take close up shots of the item or walking shots – they only have one camera crew filming you, although on the TV programme it looks like there is more, just clever cutting between shots.

It was surprising how difficult it actually was to purchase our items, trying to find something in a retail setting to sell at a trade auction and make money on was tricky. Jonathan our expert would also get distracted and sometimes be deep in conversation with stall holders – we kept having to drag him back to the task in question!  But we did it and all too soon we were waving goodbye to the crew and fellow contestants and waiting eagerly for the Bargain Hunt Auction Day to approach.

We thought the day filming our buys was hectic, but the bargain hunt auction day filming was even busier. This time they were filming four programmes worth in one day, this includes the Experts buy ‘reveal’, so that’s eight reveals and eight auction lots – we also filmed the reveals in a different location to the auction, so the day was very busy to say the least.

It was great to meet all the other contestants and the atmosphere throughout the day was great. It was an incredibly hot day and we weren’t looking forward to wearing our allocated fleeces, luckily the BBC budget stretched to allow us a polo shirt too! Apparently one of the few times a team has been allowed to take away a fleece and a polo shirt – woo hoo!

The Bargain Hunt Team were fantastic at organising everything, they kept everything a secret and wouldn’t discuss anything about each teams items. We all had to wait in the pub next to the auction house (hard life) whilst each team were quickly rushed across just before their lots were due to go through. At one point one set of contestants literally had to run to get there in time as the Auction House wouldn’t stop for the filming. 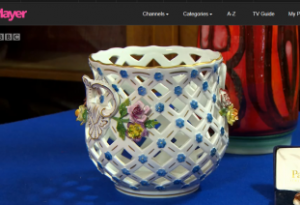 It was soon time for us to make our dash from the pub to the Auction House. We were whizzed through a side door, into the hot auction room bursting with buyers. We squeezed through to the tiny spot at the back of the room where the crew were pushed together waiting for us. We quickly gathered ourselves whilst the Director told us to be as animated as possible (makes for better viewing apparently), and not to worry about making a mistake or stumbling with words, as they would still continue to film and cut the mistakes out later – what a relief… One of the researchers was holding a set of flip board numbers informing us how long we got to our first lot and before we knew it our first purchase, the Dresden Bowl, was being displayed on the large screen.

Three lots later, after our last item was purchased by a Russian buyer via the internet, we were in profit!! Now came the decision as to whether to go with the Experts buy – a set of glasses and decanter, we quite liked the fact the Jonathan looked a little surprised when we agreed to go with it. I think they asked two or three times if we were sure, but we were happy for the Expert to feel the pressure – after all he was the ‘Expert’. Well luckily it did make a profit and I think he was more relieved than us!

We were soon back in the Pub with our ‘lips sealed’ until all the couples had had their moment in the Auction Room. At this point we were taken back to our previous location to film the results interview, and of course the final iconic ‘Kick’ at the end of the show.  We hadn’t got a clue that we’d won until the cameras were rolling and Eric announced ‘the winners are the Blue Team’! To be honest it was great to win but it wouldn’t have made a difference if we’d lost, we’d had a fantastic time and we loved meeting all the other contestants. It was just a great experience we would thoroughly recommend it to anyone thinking of applying, although we are happy sticking to canal boat building as a day job!!

For anyone yet to watch the show it can still be viewed on BBC iPlayer just follow the link to watch: http://www.bbc.co.uk/iplayer/episode/b088s80t/bargain-hunt-series-45-28-kedleston-19.